​William Winter was born in Winnipeg and was described as a romantic painter of urban life
as he enjoyed capturing people in their ordinary pursuits.  He had a particular interest in children's activity
and the ballet.  He is one of the few artists who have been able to bring to life the movement and spirit
of his subjects especially in depicting his sensitivity for children.
Winter studied art under two members of the Group of Seven, Franz Johnston and Lionel FitzGerald at
the Winnipeg School of Art from 1923-1929.  From 1930 to 1935 he worked as a commercial artist
at Brigden's in Winnipeg while continuing to study art.
He moved to Toronto in 1937 and established an advertising firm called "Wookey, Winter, Bush" with
Lesley Wookey and Jack Bush in 1942.  His commercial work included painting cover illustrations
for New World Illustrated and McLean's magazine.
By 1960 Winter had completed a number of mural commissions for the Canadian Pacific Rail lounge car,
the Robert S McLaughlin Public Library, Oshawa, the Standard Iron and Steel Company,
the Children's Aid Society in Toronto and Seagrams Ltd
He also taught drawing and painting at the Ontario College of Art and the Artist's Workshop.
He moved to England in 1994 to live with his daughter for his remaining years. 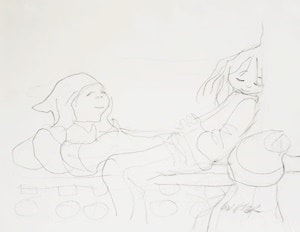 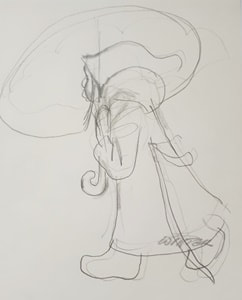