Karel Appel studied at the Rijksakademie van Beeldende Kunsten in Amsterdam.
He was influenced by Pablo Picasso, Henri Matisse and Jean Dubuffet.
He was inspired from primitive art and children's drawings.
Appel was a founding member of the avant-garde art movement "Cobra" 1948-1951 and
became the most famous Dutch CoBrA artist since WWII.
His first American exhibition was in 1954 and a retrospective of his work toured Canada and
the US in 1972 when the deluxe portfolio of six images named "Bedized Pudding Canadian Suite" was produced.
​These were published by Editions Canada in London Ontario.
"When I paint, matter is my point of departure, because it has been proven that matter is at least
​ as rich in possibilities as the mind, if not richer"
Appel established the "Karel Appel Foundation" whose purpose is "to preserve his artworks, promote public awareness and knowledge of Karel Appel's oeuvre and to supervise publication of the Oeuvre Catalogue of paintings works on paper and sculptures" 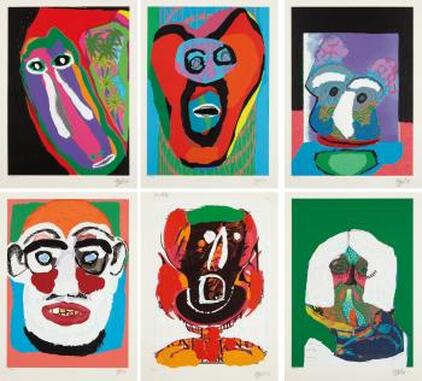