J.W. Beatty was born in Toronto and was an adventurous young man, playing the bugle with the
10th Grenadiers of the 2nd Northwest Rebellion and joining the Toronto Fire Dept in 1899 meanwhile continuing to paint.
He studied at the Academie Julian in Paris receiving awards for his figure drawings
and then returned to Toronto  to open a studio and teach at the Ontario School of Art and Design.
He was greatly influenced by the French landscape painters known as the Barbizon's.
Beatty was a good friend of Tom Thomson, A.Y. Jackson and other members of the Group of Seven.
​He was one of the first residents of the famous Studio Building in Toronto. 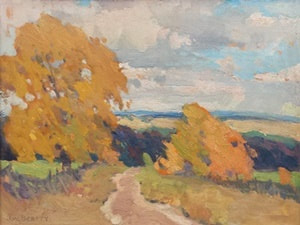