Frederic ​Bell-Smith was born in London, England.
He first studied under his father who painted miniature portraits.
The Bell-Smiths came to Montreal in 1867 and in 1871 Frederic
moved to Hamilton with his wife and worked for James Inglis photography firm.
He studied at the Academie Colarossi and later he became the
Art Director of Alma College; then Drawing Master at Central Public School and principal
of the​ western branch of the Toronto Art School. 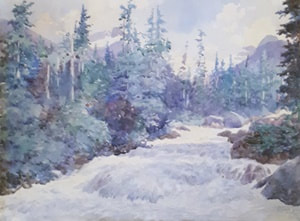