Leon ​Bellefleur was born in Montreal and attended the Ecole Normale Jacques-Cartier for three years
as well as taking drawing classes at the Ecole des Beaux-Arts.   He joined the Prisme d'Yeux group along with Albert Dumouchel, Jacques de Tonnancour and Louis Archambault.
Bellefleur became interested in the surrealist preoccupation of the subconscious as a source of inspiration.
He taught elementary school for 25 years and after his retirement in 1954 he set up a studio in the Provence of Paris but returned to Quebec in 1966.  He created illustrations for Editions de l'hexagone and Eitions du Noroit.
Bellefleur received many awards such as the Jessie Dow Prize, Spring Exhibition, Montreal Museum
of Fine Arts, 1951; Prize for painting, Commonwealth Contest, Vancouver, 1956; Prize for drawing, Second Biennial Exhibition of Canadian Art, National Gallery of Canada, Ottawa, 1957; Scholarship for research by the Arts Council, 1958; Canada represented by Alleyn, Bellefleur, Borduas, Riopelle and Town, received the Guggenheim Prize for
the best national presentation, Guggenheim Museum, New York, 1960;  a scholarship for research by the
​Arts Council, 1968 and the Borduas Prize, Government of Canada, 1977. 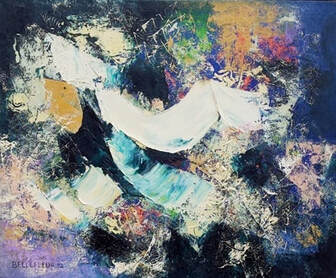