Archibald Browne was born in England and studied at the Glasgow School of Art in Paris.
He came to Canada in 1888 to work in commercial offices and furthered his studies under William Cruikshank in Toronto.
He was a founding member of the Canadian Art Club in 1907 that
had members such as Horatio Walker, Homer Watson, Curtis Williams and J. W. Morrice.
He was also a member of the Royal Canadian Academy and when
he moved to Montreal in 1923 he became a member of the Pen and Pencil Club of Montreal.
From 1927 to 1948 he relocated to Lancaster Ontario where he made sketching
trips to the Laurentians.  Browne is best known for his romantic landscapes and some of his major works
are in the ​Art Gallery of Ontario and the National Gallery of Canada. 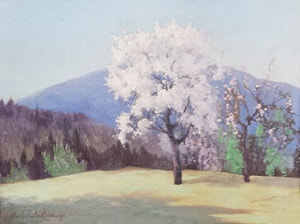