Lionel ​FitzGerald was born in Winnipeg.
He worked as an engraver from the age of 14 to 21 and attended  art classes at A.S. Kesztheli’s Art School.
He exhibited with the Royal Canadian Academy from
1912 to 1925and completed studies at the Artist Student’s League in New York.
He taught at the Winnipeg School of Art.  In 1932 he was a later member of the Group of Seven replacing JEH MacDonald.
FitzGerald chose simple subjects for his paintings that reflect the strength
of the ties to his home region such as prairie scenes, his neighbour’s backyard, potted plants.
​After the Group disbanded in 1932 he became one of the founding members of the Canadian Group of Painters. 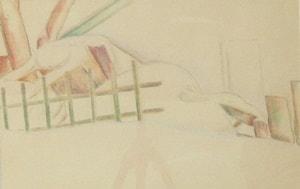