Betty Galbraith-​Cornell spent summers in Metis Beach, Quebec where she painted Quebec villages
and other landscapes for many years.  She joined the Group 80 artists in Montreal and the Society of Canadian Artists. During the Second World War she moved to Halifax where she painted in Peggy's Cove.
​ Following the end of the war she returned to Montreal where her
​painting excursions were mostly to the Laurentian Mountains and sometimes in the Eastern Townships.
Cornell took two trips to the western Arctic in the 1990’s.
She has been represented by John A. Libby since 1988. 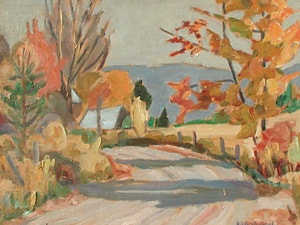