Julius ​Griffith was born in Vancouver, B.C.  He enjoyed artistic expression from his early on in childhood
and when he was of age he studied at the Vancouver School of Art under Frederick Varley and J.W.G. MacDonald.
He traveled to England where he studied at the London County Council Central School
of Arts and Crafts under John Farleigh and Noel Rooke as well as at the Royal College of Art, London under
Sir William Ruthenstein and Gilbert Spencer.
He returned to Canada where he established a considerable reputation as a graphic artist
especially in wood engraving.  In painting he was a colour field painter influenced by modern French and
New York artists,  and by renowned Canadian artist David Milne.
Julius Griffith is represented in the collections of the Art Gallery of Ontario; the Art Gallery of Hamilton;
the Toronto Public Library; City of Toronto, McMaster University; Carleton University.
Julius' works have been represented by John A. Libby since 1987.
A booklet on the artist was published by John A. Libby.  See "Shop" on this website for details. 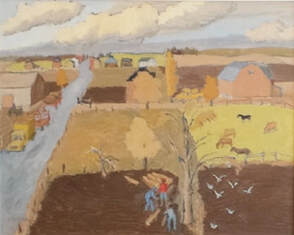