Franz ​Johnston was born in Toronto and studied at the Central Technical School
under Gustave Hahn; the Central Ontario School of Art under William Cruikshank and George Reid;
the Pennsylvania Academy under Daniel Garber and Philip Hale.
He worked at Grip Ltd. in Toronto and at the Carleton Illustrators Studios in New York.
Johnston painted for the Canadian War Memorials in 1917-18 and was principal at the Winnipeg School of Art (1920-24) before returning to Toronto to teach at the Ontario College of Art (1927-9).
He was an original member of the Group of Seven and participated in three of the four "Boxcar" trips
to the Algoma region and in 1920 showed works at the Group's first exhibition at the Art Gallery of Toronto.
He changed his name from Frank to Franz in 1925.
In the 1930's he operated his own private art school in the Georgian Bay area.  Simpson's Fine Art Gallery sold his work so well that they opened a "Franz Johnston Room" to show his highly saleable works.
Johnston was offered a flight to Eldorado Gold Mines by Gilbert LaBane to paint the north.
​This five month trip in 1939 was Johnston's most significant experience. 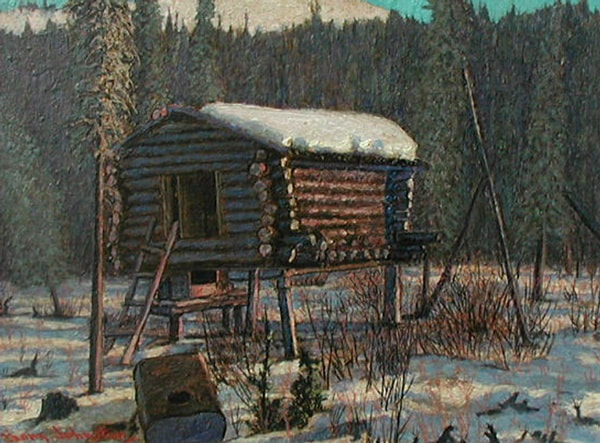