Arthur Lismer studied at the Sheffield School of Art, the Heeley Art Club in England
and the Academie des Beaux-Arts, Antwerp, Belgium.
He came to Toronto in 1911 and taught at the Ontario College of Art from 1915 to 1916.
He was the principal at the Nova Scotia College of Art in Halifax from 1916 to 1919 and painted in
Halifax for the Canadian War Memorials.  He then moved back to Toronto where he was vice-principal of the Ontario College of Art from 1920-27.  He was Educational Supervisor at the Art Gallery of Toronto from 1929 to 1936.
He taught at the Columbia University in New York (1938-1939), became
principal of the school at the Montreal Museum of Fine Arts and taught at the McGill University.
He worked for the Grip Ltd. Engraving Co. and Rous & Mann where he met
​ and joined members of the Group of Seven in its formation. 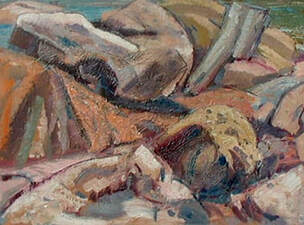 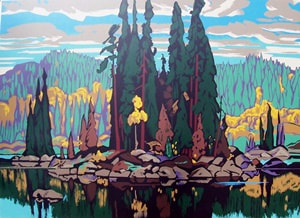