George Lonn was born in Rocanville, Saskatchewan.  He demonstrated a gift for portraiture at an early age.
Paper was scarce but he would draw portraits of his classmates and their horses
on the blackboard to entertain the children.  His talent was recognized so he was sent to study at the
Ecole des Beaux Arts in Montreal following graduation.  He stayed on as a teacher in sculpture and painting.
As a noted portrait artist, he drew and painted many leading
figures of the 20th Century including Prince Phillip, Sir Winston Churchill, John F. Kennedy,
Lester B. Pearson, and scores of others.
Fascinated by the native peoples of the North as well as other communities in the
Americas, Lonn traveled to the Arctic in 1966 and 1968.  Many of his sketches and paintings document
​ their vanishing lifestyle and traditions of indigenous people. 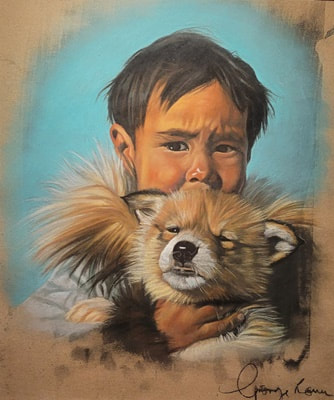