J.E.H. MacDonald was born in Durham England.  He came to Canada in 1887 and studied at the
Hamilton Art School and the Central Ontario School of Art in Toronto under William Cruikshank and George Reid.
He worked as a graphic designer for Grip Ltd in Toronto  and later at the Carlton Studio in London  from 1904 to 1907.
He made his first trip to northern Ontario in 1909 with Lawren Harris and others to Algoma in 1918.
He also traveled to the Atlantic Coast, the Rocky Mountains and the West Indies.
MacDonald taught at the Ontario College of Art from 1921 and was principal from 1929 up until 1932.
​ He was an original member of the Group of Seven and a founding member of the Canadian Group of Painters. 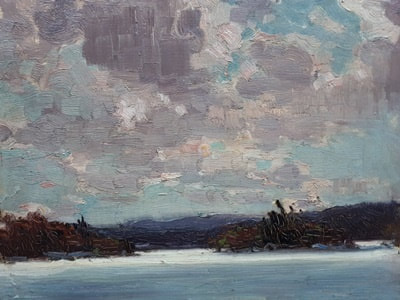