​Marmaduke Matthews was born and educated in England.  He studied under
T.M. Richardson (a water colourist) and other art masters before coming to Toronto in 1860.
He purchased land and built his home on a property he named “Wychwood Park”.
His first trip to the Rockies was in 1887 with F.M. Bell-Smith and
T. Mower Martin and made many trips to the west and east coasts of Canada.
He also became well known for his portrait paintings.
He was a founding member of the Ontario Society of Artists in 1872 and a
founding member of the Royal Canadian Academy. 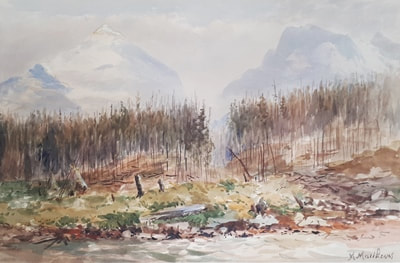