L.A.C. ​Panton was born in Cheshire, England.  He moved to Toronto at the age of 17 and attended
evening classes at the Ontario College of Art and Central Technical School under C.M. Manly and F.S. Challener.
With sufficient training and natural ability in art he started at the firm of
Rous and Mann as a designer under A.H. Robson.  In 1924 he became an art teacher at the
Central Technical School where he conducted classes until 1926.
He was appointed director of art at Western Technical School (1926-37),  became art director at
Northern Vocational School (1937-51) and also principal of the Ontario College of Art from 1951 to 1954.
During this time he was build­ing a career as one of Canada’s important painters.
His early work was a lyrical simplified realism which included landscapes, figure studies and residential city scenes.
He moved into a more vigorous stylization in his landscapes with emphasis on rhythmic patterns.
In his final years he achieved greater freedom in semi-ab­straction as seen in his scenes of
​mist-shrouded rocks of Nova Scotia shorelines. 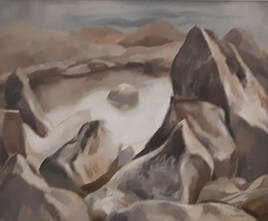