Alfred Pellan was born in Quebec and studied at the Ecole des Beaux-Arts de Quebec.
He sold his first painting at the age of 17 to the National Gallery of Canada.
In 1926 Pellan received the first fine arts scholarship in Quebec so he spent several years in Paris.
He studied at the Ecole nationale superieure des Beaux-Arts in Paris (1926-1930)
and the Grande Chaumiere, Colarossi and Ranson art academies.
He taught at the Ecole des Beaux-Arts in Montreal until 1944 and then illustrated
poetry books and designed costumes and sets for the theatre.  In 1952 he received a scholarship from the
Royal Society of Canada and returned to Paris until 1955 showing 181 works in the
Musee d’Art Moderne de Paris.  His works were exhibited at the Venice Biennale in 1952.
Returning to Quebec he took a position as professor at the Art Centre
of Sainte-Adele, also receiving commissions for murals.
In 1971 he was awarded with an honorary doctorate from Sir George Williams
University (Concordia University). 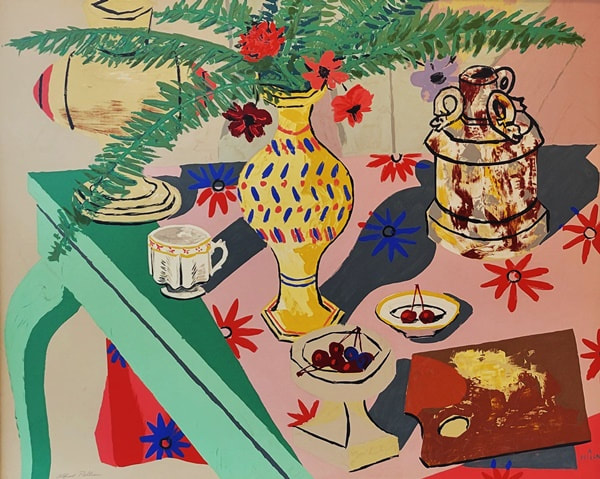