Robert Pilot was born in St. John’s Newfoundland.
Perhaps the most significant influence was his stepfather Maurice Cullen.
After having studied under William Brymner in Montreal, Pilot traveled to Paris in 1920 to study
at the Acadèmie Julian where he exhibited at the Paris Salon in 1922.
While in France he also visited the artists’ colony at Concarneau in Brittany where he absorbed the work of the Impressionists and later incorporated their style into his own work. 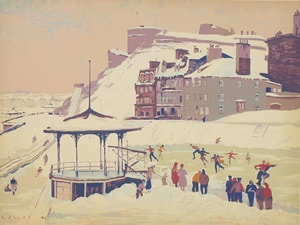