​William Ronald studied at the Ontario College of Art and
then moved to New York where he joined the Manhattan's Kootz Gallery.
​On his return to Toronto he was made a member of the
Royal Canadian Academy of Arts.  He worked as a journalist for the CBC as well as gaining
recognition for his highly abstracted portrayal series of Canadian Prime Ministers.
This series is part of the permanent collection of the Kitchener-Waterloo Art Gallery.
Ronald founded the influential Canadian abstract art group "Painters eleven" in 1954.
​He was the older brother of painter John Meredith. 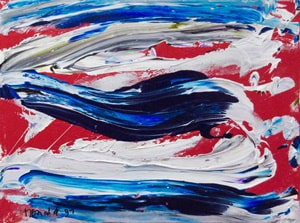