​  Stanley Turner was born in Aylesbury, England and studied at the S. Kensington School of Art in London .
He came to Canada in 1903 and settled near Yorkton, Saskatchewan where he farmed
for a number of years while pursuing his art.  He moved to Toronto in 1911 and worked in advertising
as well as studying at the Ontario College of Art with George Reid and J.W. Beatty.
He worked in various mediums and  his artworks frequently depict urban scenes.
They have been exhibited widely and can be found in the collections of many museums and galleries
including the National Gallery of Canada, the University of Saskatchewan, the Royal Ontario
Museum, Canadian War Museum and the Art Gallery of Hamilton. 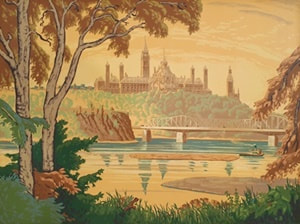