​Mary Wrinch was a painter as well as a very accomplished printmaker who immigrated
to Toronto from England in 1885. The artist made this city her home base, from which she ventured into
the Ontario northland to paint, particularly around Lake Muskoka.
Remarkably she adapted her modernist style to this landscape years before the Group of Seven
became famous for depicting the same region.
Her art education began at the Central Ontario School of Art, as well as at The Grosvenor Life School in London
​ and the Art Students League in New York where she also received private lessons in miniature painting.  In addition to exhibiting with the associations of the day she participated in the Canadian Painting Exhibition at the Art Gallery of Toronto (where her work was displayed alongside that of several members of the Group of Seven); the British Empire Exposition in Wembley, England (1924) and in a show at the Tate Gallery, London (1938).  She is represented in the collections of the Art Gallery of Ontario, and the National Gallery of Canada. 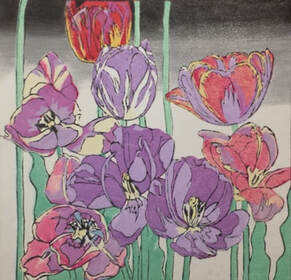